How Automation is Changing the Face of the Supply Chain

> How Automation is Changing the Face of the Supply Chain

In a world with smartphones, smart cars, and smart homes, it?s no surprise that many companies are beginning the transition to smart warehouses. 2016 was a headline year for automation in all facets of life. In recent years, the supply chain industry has exploded, coming to the forefront of the minds of anyone trying to efficiently run warehousing operations.

Warehouse automation will continue to skyrocket throughout the next few years for quite a few reasons. First, as more retailers downsize their brick and mortar operations in favour of the relatively lower overhead cost of digital storefronts, the demand for a warehouse that can essentially operate on its own via sophisticated software is growing.

Second, looking at 2017 and beyond, automation in manufacturing plants is expected to grow due to Donald Trump?s trade policy and emphasis on American-made products. Already Ford Motors has announced plans to invest $700 million in a new production facility in Michigan. In early 2016, Coca-Cola announced plans to overhaul their bottling partners in North America which it plans to complete in the upcoming year. Their goal is to blend the national brand with local, franchised bottlers. CEO Muhtar Kent described the refranchising and updating of bottling facilities, ?? a broad initiative aimed at building on system capabilities to sustain success.? One of Coca-Cola?s largest competitors, Pepsi, has been a pioneer in automation at their Tampa bottling facility.

Also, with the changing landscape of the supply chain, warehouse location is also a key to success in 2017. The modern world is one that desires immediate gratification, therefore smaller, high efficiency operations located in closer proximity to metropolitan areas are becoming a trend. 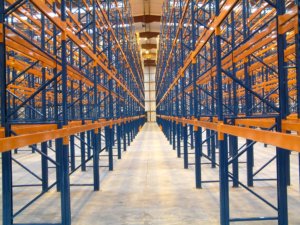 Lastly, warehouse automation virtually eliminates human error from the equation, developing new technologies that are able to not only store and retrieve pallets, but also pick specific items and place them on a loading dock. These sorts of systems can save you time and money and reduce errors so we can see them being a hit with customers!

If you are interested in a pallet racking solution, please contact our expert advisors on 0800 345 7088 or send an email to sales@advanced-handling.co.uk