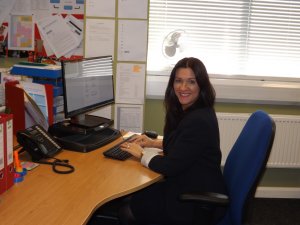 AH&SL ? What?s the most exciting thing about your job?

I love the team of people who work at Advanced and they make every day interesting!

AH&SL ? Who?s inspired you most in your career?

Working with my husband and being determined… so I guess I should say him!

AH&SL ? If you were an item in a warehouse, what would you be?

I would be the safe in the corner…. looking after all the money!

AH&SL ? If you had to do it all over again, what would you do different?

Nothing! I love what Chris and I have achieved and would not change a thing!

AH&SL ? What?s the most embarrassing thing that?s ever happened to you at work?

I cant really think of anything… or at least anything I want to share!

AH&SL ? Who or what makes you laugh?

My kids and dogs

AH&SL ? Do you have any hidden talents?

AH&SL ? Who would be your favourite party guest?

AH&SL ? What is the greatest luxury in your life?

Being able to spend time with my girls

AH&SL ? What is your favourite guilty pleasure?

I love going to the shops and spending money haha!

AH&SL ? Do you have any secret ambitions?

Not that I can think of right now…!

AH&SL ? What are your three favourite movies or TV shows of all time?

AH&SL ? What is your favourite book of all time?

Girls on the Train

Going to the gym, spending time with family and caravanning

AH&SL ? If you won the Lottery, what would you do?

AH&SL ? What would be your advice to someone thinking about coming into the industry (apart from ?don?t do it?)?