The History of the Warehouse

> The History of the Warehouse

Since being established in 1996 we have supplied, delivered and installed thousands of warehouse storage solutions to warehouses across the country. In that time, warehousing and the supply chain have seen a whole host of major developments, from the rise of warehouse management systems to the introduction of low-cost RFID tags and even the coining of ?supply chain management? itself.

The result is a smoother and more sustainable supply chain that helps get the products we love to our door faster and in more ways than ever before. Innovations in physical storage have played a crucial role in making it all possible.

This had us wondering, where did the journey begin? How did we progress from burying seeds in the ground to the watch-like precision of the modern warehouse? In this post, we?ll be digging down deep into the history of storage to find out where our ancestors chose to keep their most valued goods, and why we are where we are today.

Storage plays a surprisingly critical role throughout human history, but never was it more vital than in our early days. It is argued that storage techniques were essential to the evolution of societies, helping our ancestors ?develop beyond the normal parameters of hunting and gathering, particularly in the sociological, philosophical, and religious realm.?

Keeping extra food safe was especially important. The unpredictability of nature made seeking out an existence in the prehistoric world a tricky business, and insuring against an unfruitful forage or poor harvest could mean the difference between life and death. Some of the earliest examples of storage facilities are therefore simple storage pits designed to protect seeds and surplus food, which start to appear in the Late Stone Age, around 50,000-10,000 years ago.

It?s interesting to note that storage facilities were developed long before the advent of domesticated crops or animals. Archaeologists and anthropologists, have even suggested that storing foods may have been a necessary precursor to domestication. Yet more complex, purpose-built granaries date back as far as 9500 BC in the Jordan Valley, coinciding with the dawn of agriculture.

All Roads Lead to Rome

As with so many things, the road to the modern warehouse was paved by the Romans. Storage innovations were a necessary result of their enormous population and the ballooning requirements of commerce. According to Robert I. Curtis, by the second century AD, ?The supply of just grain, wine and olive oil exceeded 400,000 metric tons, including over 100 million litres of wine, brought annually to Rome in over 1,692 ships.? Even now, Britain?s busiest port, Felixstowe, only welcomes around 3,000 ships each year.

It?s little wonder that Aelius Aristides, a Greek speaker, described Rome as ?the earth?s warehouse?. To store such an immense bulk of produce, the city possessed close to 300 warehouses of various sizes. Unlike some peoples of the provinces, the Romans preferred to store their goods above ground. Rural warehouses tended to be built of wood and raised on supports to provide ventilation to easily spoilt grains. But it?s the large warehouses, (or horrea), found in military camps and port cities that best resemble the buildings of today.

Horrea were rectangular buildings, often two or more storeys high, built of stone with a raised ground floor and overhanging roof to keep the walls cool and dry. They could also be truly massive, even by modern standards. The Horrea Galbae complex contained 140 rooms on the ground floor alone, covering an area of some 225,000 square feet. Today, less than half of U.S. warehouses are larger than 100,000 square feet.

Yet it isn?t simply scale that makes horrea so familiar; they were also pragmatically designed and meticulously managed. Thick walls and spaces between adjoining warehouses blocked the spread of fire, while elaborate lock systems and high, narrow windows discouraged theft. Some buildings even featured access ramps and mezzanine floors ? uncanny! 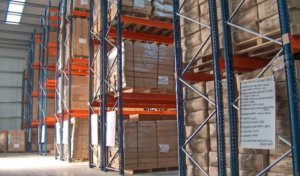 During the Middle Ages, the building of traditional horrea was abandoned, though existing structures continued to be used. In Europe, some interesting innovations came instead in the form of the agricultural barn, particularly the aisled tithe barns developed from the 12th century onwards.

In England, tithes were a tax of around one-tenth of agricultural wealth paid to the Church. The tax was intended to sustain parish priests, maintain church buildings and provide alms for the poor, but could be used for any Church business. Incredibly, the system wasn?t entirely replaced until 1836.

It?s hard to imagine just how much space a tenth of the country?s crops, eggs, wool, timber and more would occupy. No wonder tithe barns were such significant structures for the time. Great Coxwell Barn, for example, is a 14th-century barn in Oxfordshire measuring 44 x 12m. As archaeologist Mick Aston puts it, ?These were the warehouses of the Middle Ages ? and they show the skill and craftsmanship of the medieval workman at its best.?

In general, medieval merchants stored their wares in cellars, back rooms or small outbuildings around their home. But, as international trade began to pick up, warehouses were built in ports to handle goods arriving from or destined for the sea.

The Wool House in Southampton, built in the late 14th century to store wool for export, gives us some idea what these commercial hubs looked like. The typical format is strikingly similar to the old Roman horrea: a long, rectangular building, two or three storeys high, with a timber frame and stone walls. King?s Lynn, Norfolk, also has a number of historic warehouses spanning from the 15th to 18th centuries, proving just how steadfast this design was.

The Age of Industry

From the Tudor period onwards, architects moved away from traditional stone towards brick construction; however, timber structures remained widespread. The watershed moment came in the last few decades of the 18 century, when new production processes made both cast and wrought iron available on an industrial scale. Especially important was Henry Cort?s revolutionary puddling process for making malleable wrought iron without charcoal, patented in 1784.

The result was an entirely new structural material, and it wasn?t long before industry put it to good use. In 1796, work started on what would become the oldest iron-framed building in the world, the Ditherington Flax Mill. Nicknamed ?The grandfather of skyscrapers?, the building is regularly listed as one of the most important in history. The sloped roof sections reminiscent of today?s warehouses.

The Ditherington Flax Mill wasn?t a warehouse, but its brick and iron-framed style spread to every form of commercial building throughout the 19th century. Centres like Manchester, dubbed ?warehouse city?, saw the number of similarly built warehouses explode in a matter of decades. These warehouses also began to specialise, with separate display, rail, export and packing warehouses popping up across the country.

The scale of warehouses had been gradually increasing from the 18th century onwards, providing as much storage space as the confined sites near docks would allow. By the 19th century, they were truly monumental. Watts Warehouse, one of Manchester?s impressive textile warehouses, is a case in point. Completed in 1856, the building is 30m high and 90m long. It?s also dressed to impress, with five storeys, each decorated in a different style, from Italian Renaissance to Gothic.

In the first half of the 20th century, standardisation and efficiency were the business buzzwords of the age, thanks in large part to the popularity of Taylorism. These principles would have a massive impact on supply chains and warehouse design, laying the foundations for the buildings of today.

Usage of the word ‘standardisation’ over time

Probably the first major innovation was the forklift. Primitive trucks, lifts and hoists appeared towards the end of the 19th century, but the forklift concept truly took shape in the first quarter of the 20th century. Though these early trucks improved productivity, it wasn?t until the invention of the standardised two-faced pallet in the 1930s that the new invention really took off.

Replacing the basic skids, crates, boxes and barrels that had been in use since our Roman horrea and before, pallets enabled goods to be stacked and transported with unparalleled efficiency. Spurred on by the demands of World War II, manufacturers released a range of adjustable pallet racking in the 40s and 50s, reconfiguring the warehouse for new palletised possibilities. 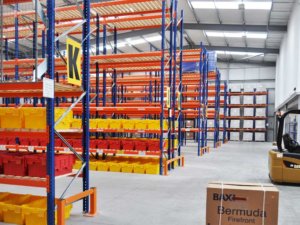 A pallet rack patent granted in 1951

With efficient vertical storage now a reality, the warehouse evolved beyond the old multi-storey Manchester model, with items stacked relatively low, to a single large room, stacked to the brim with pallet racking. The new format ? our own ? was fairly standard from the 60s onwards.

The final part of our warehouse story is all about technology. The 60s warehouse might look familiar, but the last 50 years have seen some of the biggest developments in how warehouses operate.

Of all the recent inventions, none has left quite the same mark as the barcode. In 1952, Norman Joseph Woodland and Bernard Silver patented their early design for product identification, a system of lines and circles based on Morse code. Unfortunately, the system was too expensive to roll out commercially.

An idea that would change the world lay dormant until 1973 and the adoption of IBM?s Universal Product Code. On June 26, 1974, Marsh?s supermarket in Troy, Ohio, swiped the UPC code on a pack of Juicy Fruit chewing gum, ushering in a new era.

Even then, the rise of barcodes was far from meteoric: it took until 1984 before a third of U.S. grocery stores were using the technology. Barcodes were also close to useless in warehouses, as too few products were labelled and implementation was expensive. Adoption finally picked up in the 80s and 90s when the price of related technologies began to drop.

Meanwhile, the first real-time WMS was installed by J.C. Penney in 1975, and these became gradually more accessible over the next 25 years. With a number of product identification systems available ? the UPC and around 270 other species of barcode ? and widespread WMS use that no longer required data to be inputted by hand, warehouse management had gone truly digital.

By 2004, between 80-90% of Fortune 500 companies had automated their warehouses using barcodes. Management changes soon meant physical changes. Today?s common layout techniques, like random location storage or effective zoning, are made feasible by computer optimisation. Digital automation is even contributing to the rise of ?mega? distribution centres over 800,000 square feet.

Indeed, the future is here. Amazon Robotics, Locus, Fetch Robotics and others are now offering robotic warehouse automation. Bots follow warehouse staff or are guided by barcodes on the floor to find and pick storage locations. Amazon already has 30,000 robots working in their warehouses.

If you want to find out more about the warehouse storage solutions that are available to you, please don?t hesitate to get in touch with us on 0800 345 7088. Alternatively please send an email to sales@advanced-handling.co.uk and we will endeavour to respond within 3 working hours.