You only have to search the internet or YouTube and it won?t be long before you come across some staggering images of pallet racking disasters. Literally whole towers of pallets collapsing like a house of cards or forklift trucks disappearing under a mass of boxes. Just imagine if that happened in your warehouse ? it doesn?t bear thinking about.

Thankfully, we don?t come across horrors like that very often ? probably because us and the companies we work with take safety very seriously and we?re on hand to ensure their racking is regularly checked. For companies who don?t take the necessary precautions, there can be far reaching and costly consequences.

Take this case that happened a few years ago:

A woman was killed after racking collapsed at the warehouse where she worked and sent heavy boxes crashing down on top of her, partially burying her underneath. She suffered multiple injuries and sadly died shortly after the incident. Tragically, her husband also worked at the same place and was nearby when the accident happened.

The company was prosecuted after an investigation by the Health and Safety Executive (HSE) revealed that it had failed to properly control the risks to employees within the warehouse. In particular, the racking that collapsed had been in a poor condition with important locking pins missing. They were fined ?70,000 and ordered to pay costs of ?30,974 after pleading guilty. Speaking after the sentencing hearing, HSE Inspector Roger Amery said: “Virtually all industries use racking in one form or another and I hope that this case will serve as a reminder that attention to detail is crucial when erecting, maintaining and inspecting racking to ensure its integrity.” 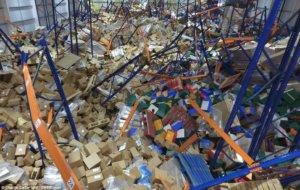 Make sure you contact our experts today on 01388 779111 or email sales@advanced-handling.co.uk

Make sure you follow all things #TeamAdvanced on Social Media!